Sherburn in Elmet is a large village, situated near to Selby in North Yorkshire.

Historically part of the West Riding of Yorkshire, it is one of only three places in the area to be explicitly associated with the ancient Celtic kingdom of Elmet via featuring the kingdom's title in its name, the others being Barwick-in-Elmet and Scholes-in-Elmet.

During the Civil War two skirmishes took place in Sherburn - first of all in 1642 and then 1645. The latter of these was more significant and resulted in a rout of the Royalist forces commanded by Lord Digby. In the 18th century the new turnpike road along the line of the present A162 brought with it the coaching Inns that served the mail and passenger coaches to and from York. There were services to London, Edinburgh, Sheffield, Newcastle, Selby (connecting to the steam packet) and Scarborough, and at one time there were at least 4 inns serving this trade in Sherburn. One of these was the Red Bear (run by Robert Hough) - which also acted as the meeting place for the local magistrates.

The 19th century brought the Railways and one of the earliest routes from Leeds to Selby in 1834 brought jobs and development to the area. Soon after in 1839 the York and North Midland line created the railway communities at Sherburn station and Milford Junction.

Until early in the twentieth century the village was almost self supporting, not only with grocers, bakers and butchers but with blacksmiths, wheelwrights, tailors, dressmakers and boot and shoe makers.

Sherburn was well known in the nineteenth century for growing teasel for use in the West Riding textile industry.

Julius Falconer's novel "Death by Aloe Seed" is a fictional account of life in Sherburn during this period. The names of his characters were drawn from the parish records of the time.

1741 Henry Huntriss was born in Sherburn on 27 May 1741 to William and Elisabeth. William, a cordwainer(shoemaker) and Elisabeth were both born in Scarborough and also married there.

1803
Henry Huntriss takes on an apprentice.

10 October 1806
Henry signs an "Indenture of feoffment" transferring property to a John Wardell. It seems likely that the property had come from his wife's family. 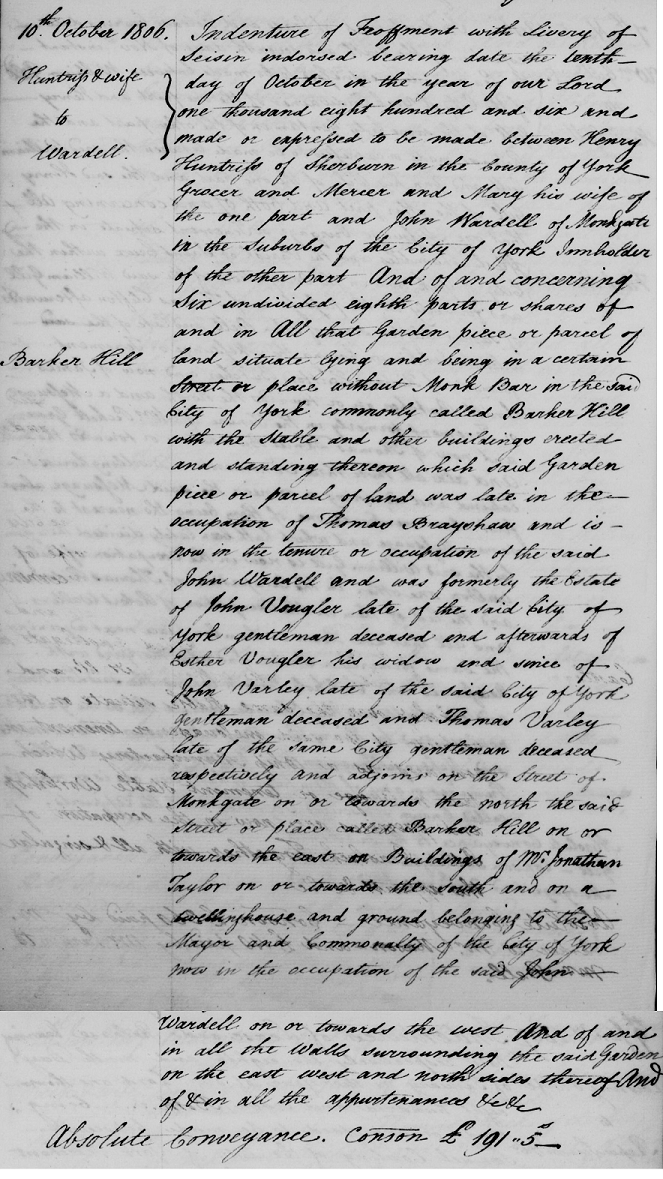 In English law, feoffment was a transfer of land or property that gave the new holder the right to sell it as well as the right to pass it on to his heirs as an inheritance. It was total relinquishment and transfer of all rights of ownership of an estate in land from one individual to another person.

Livery of seisin is an archaic legal conveyancing ceremony, formerly practiced in feudal England and in other countries following English common law, used to convey holdings in property. The term "livery" is related to, if not synonymous with, the word "delivery" as used in modern contract law. The common law in those jurisdictions once provided that a valid conveyance of a feudal tenure in land required the physical transfer by the transferor to the transferee, in the presence of witnesses, of a piece of the ground itself, in the literal sense of a hand-to-hand passing of an amount of soil, a twig, key, or other symbol.