THREE OF A KIND

In the week leading up to Easter 2020, three members of the Huntriss family passed away. This remarkable trio had a combined age of 297, and each will be greatly missed. 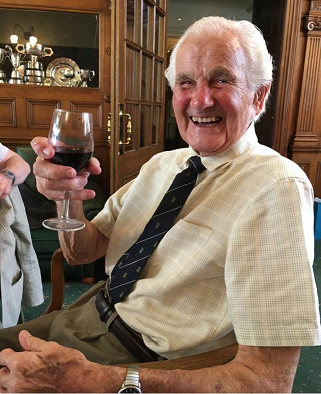 He was a pupil at Birkenhead Institute, where he was a school sprint chamption and Victor Ludorum. A fine rugby player; he played for the RAF, Birkenhead Park and Cheshire, returning to the Old Instonians and playing for a number of years and was an excellent skipper both on and off the pitch.

Stuart joined Midland Bank in 1940, and after a period of war service as a flying instructor in what was then Rhodesia, rejoined the bank, staying with them for all his working life.

In 1947,Stuart married May and they had two sons, Michael and Roger.

Stuart took an active part in community life. He was a magistrate, and was involved with the Cheshire Scout Association, the Ellesmere Port YMCA and was the president of the local Rotary club.

Mabel was born in the Cockermouth area in 1919, and attended the National School in her home village of Crosby. She later attended the Thomlinson Girls School in Wigton - this school was later to merge with others to become the Nelson Thomlinson school, which lists Melvyn Bragg amongs its former pupils.

Mabel worked at "Longtown 14MU" during the war. This was No.14 Maintenance Unit, based at RAF Carlisle, and was used by the RAF to store and maintain various pieces of equipment ranging from aircraft engine parts to firearms, ammunition to office furniture, aircrew clothing and small hardware items.

Mabel married Richard Huntriss in 1944. Whilst Richard was born in Workington, some 9 miles south of Crosby, this was not a simply local boy meets local girl story. In the early 1930's, Richard made the decision to move south to find work, and travelled down to Coventry in the back of a truck. His decision paid off, and he found a job working as a delivery van driver, delivering in the Warwickshire area. When the war came, Richard volunteered for the RAF, and ended up on a repair and salvage unit in the Nubian desert.

Sadly he contracted polio when he was there, and was discharged from the RAF. Richard did find employment - involved with setting up telephone exchanges all ever the country. One of these was in Carlisle - and stayed at the same digs that Mabel was using.

Mabel and Richard had two sons, Derek and Brian.

Yvonne was born in Hampstead in 1918.

Her ambitions were reigned in by the social conventions of the day - she wanted to go to university, but her father belonged to the era when women didn't go to university - they were brought up to get married, but that did not suit her at all - she wanted a career. Finally, with her mother's urging, her father allowed her to go to a teacher training college in Kensington.

She continued teaching the war; her youngest brother Louis was taken prisoner by the Japanese at Singapore. She hoped that her brother would find a friend there, and that is exactly what happened. That friend was Charles Huntriss.

The couple eventually moved to Bloxham, and became heavily involved in village life. She started a Brownie pack in the village, she and Charles became involved in fundraising for the local church, putting on pageants based on Bloxham history, then started the local museum. She was awarded an MBE for her work. She was a talented artist, and wrote several books on local history.